With a combination of stress at work and his stepfather's brain cancer not responding to treatment, Roy has been really burned out these past few months. I wanted to get him a gift that was in no way practical (as he prefers his gifts), and would help take his mind off things for a bit.

Amazon had a small quadcopter with a camera on sale for Prime Day, and I know Roy had been wanting a drone very much but hasn't been able to justify the cost of purchasing one. While normally $40, the discount I received for Prime Day, plus an additional discount for ordering via Alexa, combined with some credit I'd acquired thanks to the Kindle settlement... I was able to buy it for just $2.19! YEAAAAH.

Here is its maiden flight (as well as Evie and Ringo's reaction to it). It's much harder to pilot than you'd expect! My favorite part of the video is that gleeful little smile on Roy's face at the end right after he crashes it into the house. The drone was definitely worth it. Even if it did crash into everything in sight (and every time it did, Ringo would run after it and swat at it with his paws).


Roy convinced me to try piloting it, and I promptly landed it on the roof, then into a tree, and then managed to fly it right over the fence and into the neighbor's yard. It landed upside down - no flying it out. We had to fish it out with a rake. So much fun!
Posted by ♥Miya 15 comments:

Email ThisBlogThis!Share to TwitterShare to FacebookShare to Pinterest
Labels: life

I had an MRI earlier this month. It was basically like being trapped inside an undersized tanning bed and being forced to listen to bad 8-bit dungeon crawling music for an hour. But the results are back and, despite how insulting it may sound, the results are actually good - everything is "unremarkable".

I've been on Topiramate for two and a half weeks now. Long enough for the 24/7 "early-treatment phase exhaustion and nausea" to finally wear off. Not everyone has that initial phase, but the neurologist started me off at a high dose - necessary, he said, because of my large size. There are other side effects, too. Soda and other carbonated drinks taste disgusting. As someone on /r/askscience so accurately described it, soda now "tastes like flat Alka-Seltzer poured from an old ashtray". I also don't sweat as much. It was a little nerve-wracking at first, and Roy was particularly worried about that one, but once the nausea wore off and I'd been able to get back on an exercise program, I've come to realize I can still sweat, I just don't do it as much, and it takes me longer than usual to start. So I do have to be careful and be aware of my body temperature, even more so once the weather gets warm enough for hiking.

I also find that I randomly experience little boughts of "brain fog" throughout the day. Sometimes I will get stuck on a word when I'm talking and can't figure out what it is, or I'll go back and reread something I wrote and realize I left a word or two out completely (which I hope goes away soon, as freelance editing/transcription work is sort of my gig right now and no one wants an editor who has brain farts).

So far there hasn't been any improvement. I've had either a headache or a migraine nearly every day this month (so far, only two days have been pain free. That's been pretty typical the past year or two). But it's only been two weeks, and the neurologist said that two weeks ought to be the point at which I should start feeling better. So I'm jumping the gun on the whole "this isn't working" conclusion. Wow, it took me twenty seconds to remember the word "conclusion". I'm just so anxious to be migraine free. I'm tired of being in pain and, when I'm not, being afraid of when the pain is coming back.
Posted by ♥Miya 1 comment:

Chicken Soup for the Edwards' Souls

After three weeks of poor sleep, a terribly sore throat, daily headaches, far more migraines than usual, and spending my nights on the couch ("To help my sinuses drain" I told Roy, but honestly I just felt so guilty about keeping him awake with my cough), we decided I needed to go to the clinic to see whether or not my cold was more than just a cold. It did seem odd that after two weeks, my symptoms almost completely disappeared, only to hit me tenfold two mornings later and get progressively worse over that third week.

After going over out test results, the doctor said, "Well, the good news is, you don't have strep." He pulled out his stethoscope, listened to my lungs for a few moments, and said, "But you do have a bad case of acute bronchitis."

Roy rarely gets sick, but that morning he'd felt "kinda funny", and like he had a bit of a sore throat (it's like pulling teeth to get that guy to admit if he's feeling poorly... I quite literally forced him to the hospital last year when he broke his finger), and he decided to see the doctor with me on the off chance that he might be coming down with whatever I'd had.

"I'd better still not kiss you," I said to Roy. "I don't want you to get bronchitis."

"He'd better not kiss you." the doctor said, holding up Roy's test results. "He's got strep."

Email ThisBlogThis!Share to TwitterShare to FacebookShare to Pinterest
Labels: life

It's finally spring, and a handful of flowers have started cropping up in my yard. Finally! I've been waiting ages to finally use this press I received for Christmas. 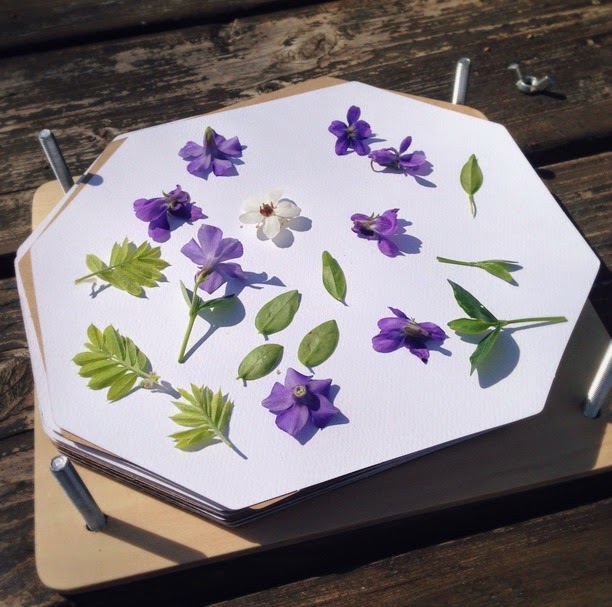 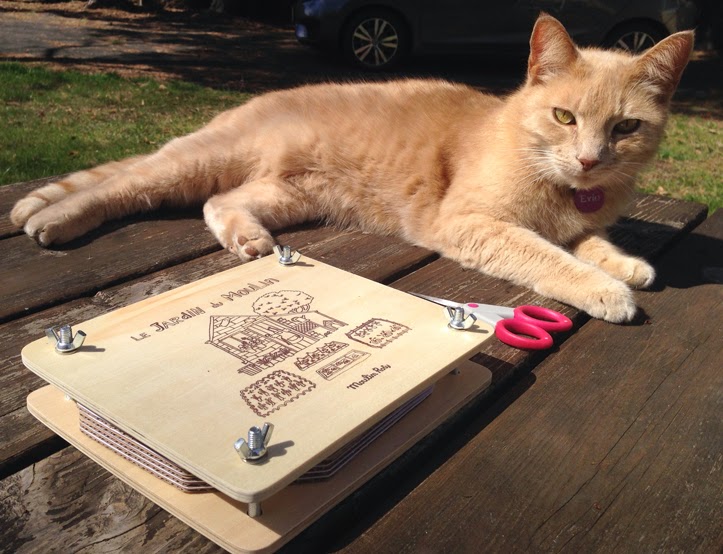 Evie helped me scour the yard for violets. We can't wait to see how they turn out!
Posted by ♥Miya 3 comments:

Welcome to my blog.

I'm Miya - it rhymes with "chia". I'm an amateur artist, a book lover, and a gamer. This is a place where I share all the things I love.